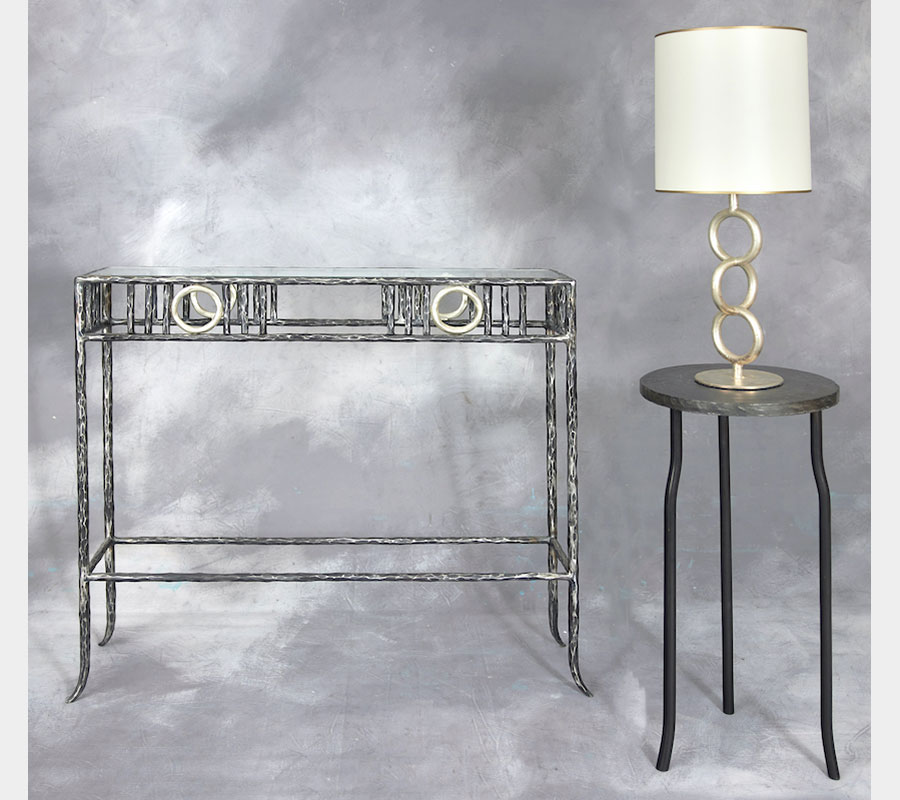 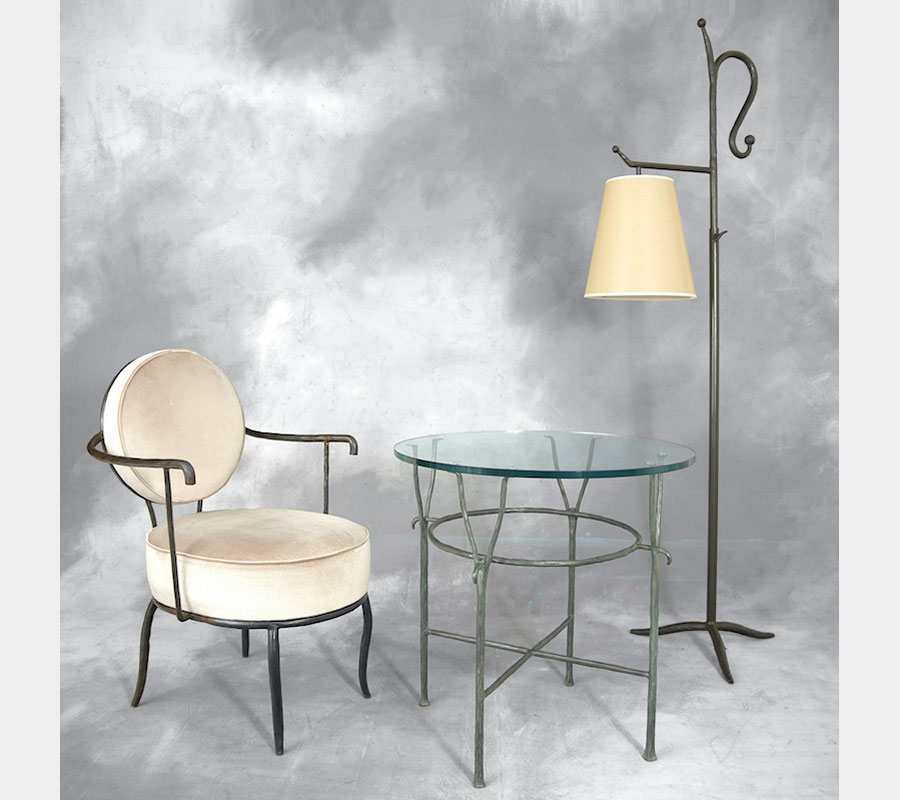 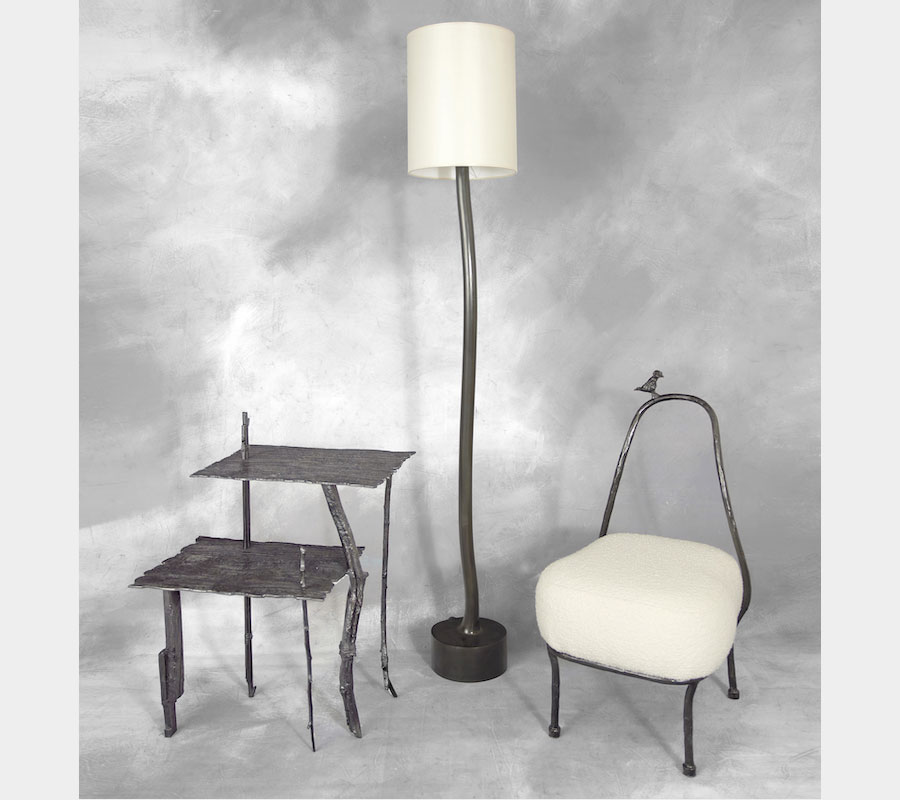 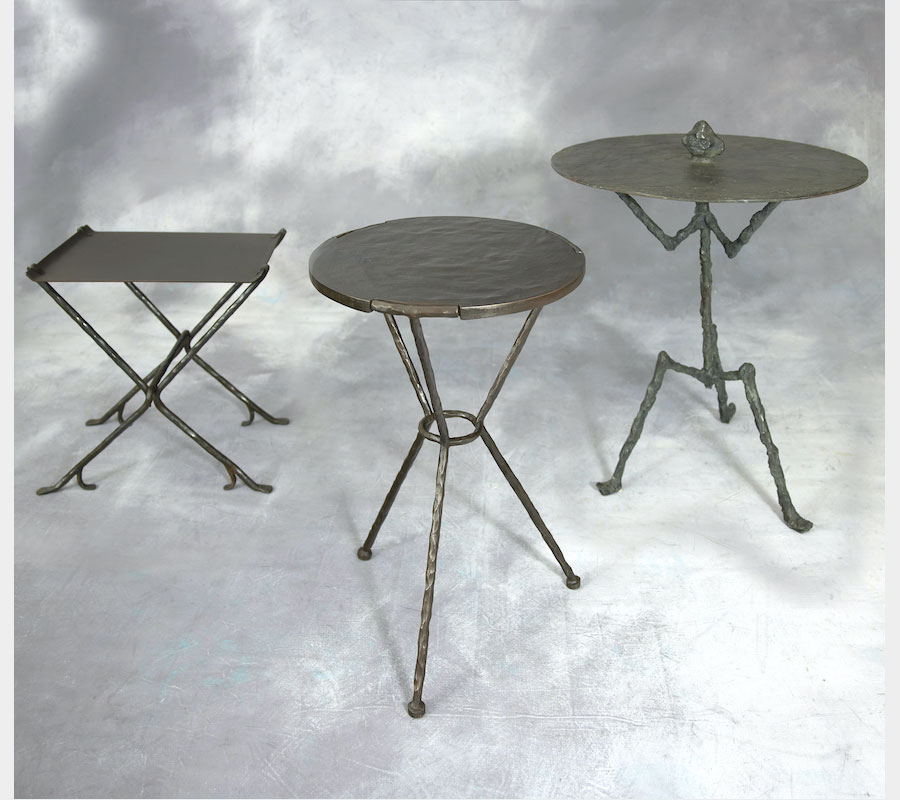 At the beginning of the 1980s, En Attendant les Barbares began producing editions of work by two novice designers: Elizabeth Garouste and Mattia Bonetti, who took the name Garouste & Bonetti. Very quickly, the duo’s culture and fantasy endowed them with the triple status of designers, interior designers, and artists. Iconoclasts, Garouste & Bonetti would instill a new style, with an eclectic inspiration bolstered by a perfect mastery of production provided by skilled artisans. Their first creations determined the bases of a new decorative trend called the “Barbares style”, one of whose characteristics was to employ the techniques of arts and crafts and find inspiration in multiple aesthetic and historical references. This non-exhaustive approach allowed Garouste & Bonetti to draw from multiple sources, thus constantly renewing their inspiration. They made use of various materials: wrought iron, bronze, wood, patinated metal, parchment.

In the great tradition of French decorative arts, in the vein of Jean Royère and Jean Michel Frank, Garouste & Bonetti reintroduced the notion of bespoke production. In the 1990s, they imagined the concept of a range of lines allowing for great variations.

Fourches (Forks), Olympiade (Olympiad, and Feuilles were so many shapes that could be adapted to different types of furniture. For example, a console could be transformed into a coffee table, a pedestal table into a dining room table, etc... In the early 2000s, Garouste & Bonetti split up, leaving En Attendant les Barbares to continue making editions of their creations. They left an impressive catalog of works, some of which have been exhibited in museums: Centre Pompidou, Musée des Arts Décoratifs (MAD), Victoria & Albert Museum (London), Grand Hornu (Brussels), Fondation Cartier, Musée Guggenheim (New York).

Today, their value to collectors has ensured that their creations have become sought-after classics—generating some impressive results, such as the sale in 2013 at Sotheby’s of a wrought iron mirror for over €103,000 euros.

Among the gallery’s great artisans, we must mention Pierre Basse, former metalworker to Diego Giacometti, who now works exclusively for En Attendant les Barbares. Over the years, Basse has developed an unparalleled expertise, mastering the specialty of hand-beaten iron. In 1985, he contributed to the production of decorative elements by Diego Giacometti for the Musée Picasso. He has also appraised pieces by Diego Giacometti for prestigious auction houses such as Christie’s and Sotheby’s. Still partway between art, design, and decorative art, the gallery also employs the skills of bronzemaker Bocquel, who has cast creations by Gérard Garouste, César, and Arman, and produced the most sculptural pieces by Elizabeth Garouste, such as the Him pedestal table or the Le Fou (The Madman) sconce.

After Garouste and Bonetti parted ways, the gallery continued to produce editions of their individual works. First Elizabeth Garouste, to whom it devoted two solo exhibitions. Then Mattia Bonetti, who went on to develop a brilliant international career.

Eric Schmitt is also among the designers of the gallery’s early days. Always loyal to En Attendant les Barbares, which curated his first solo exhibition in 1990, he was a major participant in the Diego Giacometti Forever tribute exhibition in 2020. On this occasion, Schmitt expressed himself through sculpture.

The gallery has developed collaborations with other talents from the world of design to whom it gives the opportunity to discover the proficiency of exceptional craftsmen. Over time, Andrée Putman, Eric Jourdan (ArtParis Design Prize in 2013), Christian Ghion, Matt Sindall, and Arik Lévy have joined Garouste & Bonetti, Eric Schmitt, and Olivier Gagnère.

In 2009, Andrée Putman, Agnès Kentish’s long-time friend, presented Les Boîtes d’Andrée (Andrée’s Boxes) in a solo exhibition, her first. Considered from a broad angle, she developed and extrapolated the concept of the box, moving with ease from the bedside table to the pen tray, from Macassar ebony to bronze and lacquer.

Between custom-made creations and limited series, the aim of the En Attendant les Barbares is to abolish the boundaries between decorative art, art, and design, by provoking original encounters between exceptional craftsmen and designers, the very essence of “collectible design.”